By: Gerry de Vries (Researcher to the Cannon Association of SA.)
Print Form

A pair of Armstrong pattern smooth bore 6 pounder cannon cast in England by Gordon and Stanley in the period 1790 – 1820.

These are the only cannons (among 1039 recorded in SA) which can be attributed to Gordon & Stanley and they are a pair which have been together since they were cast.

Crest of King George III on the first reinforce. GS on the trunnion end for the foundry of Gordon and Stanley. One gun has the number P 1713 on the top of the base ring and the other has 1714. These could be the weight of the gun marked in the manner used by the French.

Gordon and Stanley cast the older pattern guns long after other foundries had changed to the new Blomefield pattern of C.1790. G&S cast a lot of guns for sale on the open market and it is quite plausible that they were bought for a French trading ship which would explain the French style marking of the weight. The “M” markings on the guns could represent either the Earl of Mulgrave or the Earl of Marlborough who were both earlier Masters of the Ordnance.

In an article by Prof. Dirk Kotze published in the Burger of 12 February 1977 he states that these two guns were found abandoned behind the Sea Point town hall in 1957. His research led him to believe that these guns were removed from their original site in November 1907 on the orders of the Municipality of Sea and Green Point. The guns were mounted on wooden carriages in front of the Municipal Offices. Time took its toll and the wooden carriages rotted away and the guns were moved to one side where they lay and corroded.

The Municipality constructed the concrete carriages and built the look-out point on which they now stand in 1961. The original position was about 150 m north of the present position but these remains were obliterated when the road was built. The present site was selected for its excellent view in all directions.

THE GUNS BELOW LION’S HEAD

Condition of cannon in August 2015

Refurbishing of guns and carriages

The Friends of Lion’s Head ordered two wheel less standing wooden carriages to replace the dilapidated concrete carriages for the two English 6 pounder guns near the Kramat on Lion’s Head.

Several members of CAOSA helped with the planning, measuring and delivery of the carriages and lifting equipment to the site on Sunday 17 December 2017. 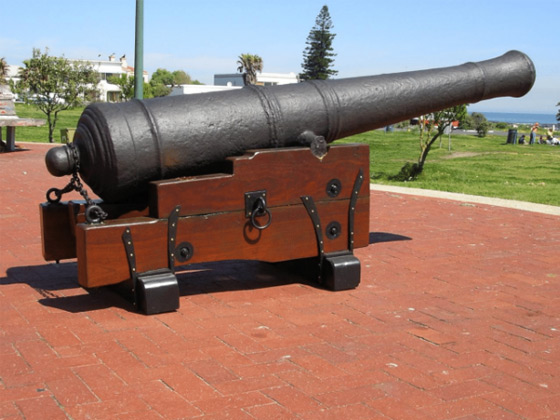