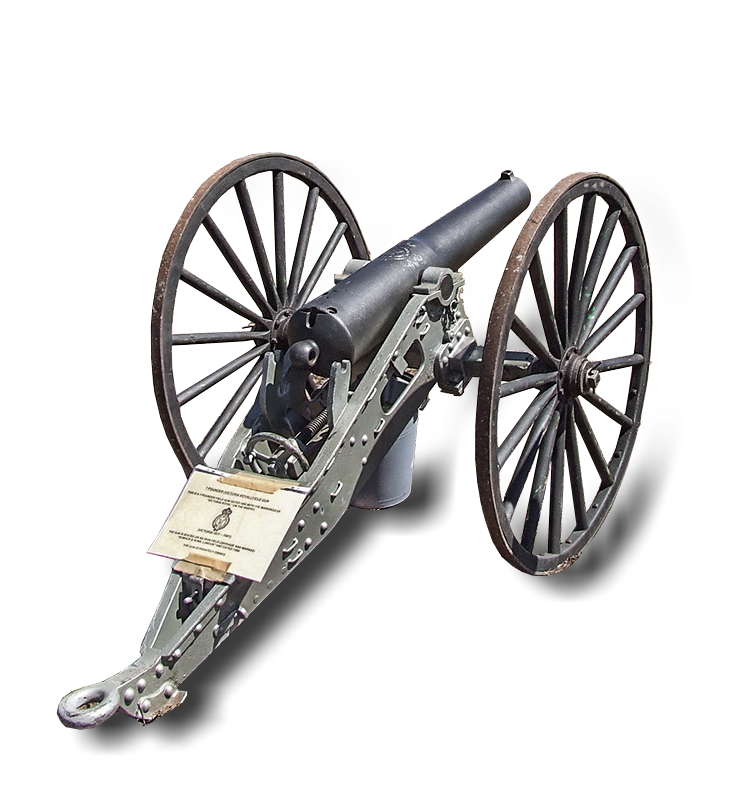 During the early 1880's the South African Republic (ZAR or Transvaal) conducted a number of small campaigns against rebelling native tribes, many of these ending up in mountain sieges. To assist, a 6.3-inch howitzer and a mortar were bought from the British Cape Colonial Government; the howitzer arriving in Pretoria from King Williams Town on 7 April 1882.
In the Transvaal the howitzer saw service during the 1882-1883 Nyabêla campaign under Commandant Henning Pretorius; later CO of the Staatsartillerie (State Artillery). During the same campaign it was used to fire the salute at Paul Kruger's first presidential inauguration in May 1883, thereby gaining a link to this famous Boer leader.

The British 6.3-inch 18 cwt RML was a typical howitzer. Compared to a gun, howitzers of those days had a shorter barrel and fired a heavier shell at shorter distances, at a lower muzzle velocity and with a higher trajectory.
This enabled a howitzer to fire its projectiles into trenches and behind fortifications, something a normal gun with it flat trajectory could not achieve. For field use the 6.3-inch 18 cwt RML howitzer was mounted on a wheeled travelling carriage originally manufactured for a 40-pr RML gun. Mounted on this carriage the assembly was similar to that of a normal field gun, but due to the howitzer's shorter barrel it could achieve a greater elevation of around 30 degrees. To fire its shells the howitzer used black powder in bagged charges.
This made its position almost impossible to hide when fired and necessitated thorough cleaning at regular intervals.
Earlier British RML artillery fired loose-fitting conical projectiles with projecting studs which slotted into deep rifling grooves in the barrel; the so-called Woolwich rifling system. This system had proved unsatisfactory as excessive windage (the escape of burning propellant past the projectile) caused erosion in the bore.
To overcome this it was necessary to devise some means of preventing the forward escape of gases when the gun was fired. After several experiments, in 1878, a copper gas-check, in the shape of a cup placed between the shell and the powder cartridge, was found to be the best solution.
Apart from preventing windage it was also found that the gas-check increased the range of the gun. Originally the gas check was not fitted to the base of the shell but rotated independently. After it was suggested that it might, by being fixed to the shell, also be used to impart rotation, the studs on the shell were dispensed with and the gascheck became an early form of driving band.
With no studs on the projectile it was now possible to use a shallow “polygroove” rifling system (20 grooves 0.1-inch deep and 0.5-inch wide with the twist increasing from one turn in 100 calibres to one in 35 at the muzzle). In Britain the 6.3- inch RML howitzer came into service in 1878 and was the first artillery piece to make use of this development.