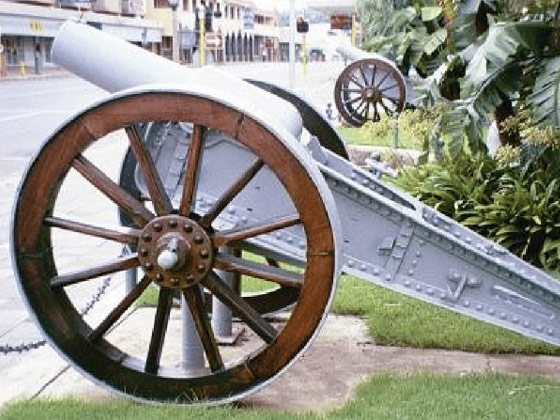 By: M. C. Heunis, 25 June 2013
When doing historical research one rarely gets the chance to "change" history. One such incident happened to me a few years ago.

Since 2000 I have been actively researching Boer republican artillery pieces and what became of them. With the help of my fellow researchers of the Oranje Vrijstaat Artillerie Corps Historical Study and Re-enactment Group we have identified and traced several Boer artillery trophies in South Africa, England, Australia, New Zealand, Canada, India and even the United States. This is the story of one of them.

In September 2004 my good friend Johan Wolfaardt, an employee of the War Museum of the Boer Republics in Bloemfontein, handed me a copy of a document he discovered at the Pretoria National Archives. This document would forever change the generally accepted history of a 6.3-inch 18 cwt* rifled muzzle loading (RML) howitzer (* 18 cwt is the weight of the gun's barrel, from breech to bore, measured in hundredweights; 1 cwt = 112 lbs). The document was a list from a British War Office file with the heading "Guns, ammunition etc. in the Fort Johannesburg" and was compiled by "Genl. Marshall C.R.A." somewhere in June 1900 after the British Army invaded Johannesburg. The first item on General Marshall's list was " One 6.3 inch RML Howitzer with carriage and limber – all made at Woolwich. The howitzer marked with Royal Monogram on top of chase and R.G.F, No.33, I, 1879 on left trunnion."

When I saw the number 33 I feverishly grabbed my "little brown book" in which I note the serial numbers of all artillery pieces that I bump into and started flicking through the pages. Could it be... is this what I thought it was or was my mind playing tricks on me? Yes! There it was...during a trip to Ladysmith a year or two before I visited two 6.3-inch RML howitzers where they stood in front of the Town Hall and indeed, one of them is No.33! 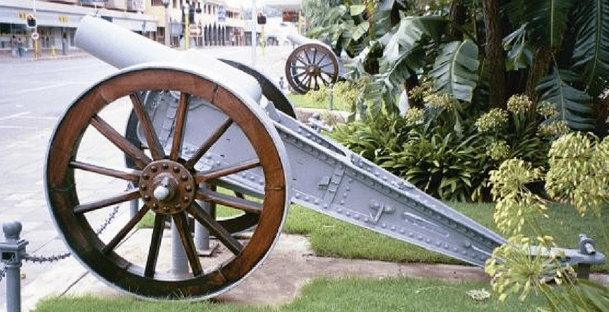 The two 6.3-in RML Howitzers in front of the Town Hall, Ladysmith, KZN

The British 6.3-inch 18 cwt RML was a typical howitzer. Compared to a gun, howitzers of those days had a shorter barrel and fired a heavier shell at shorter distances, at a lower muzzle velocity and with a higher trajectory. This enabled a howitzer to fire its projectiles into trenches and behind fortifications, something a normal gun with it flat trajectory could not achieve. For field use the 6.3-inch 18 cwt RML howitzer was mounted on a wheeled travelling carriage originally manufactured for a 40-pr RML gun. Mounted on this carriage the assembly was similar to that of a normal field gun, but due to the howitzer's shorter barrel it could achieve a greater elevation of around 30 degrees. To fire its shells the howitzer used black powder in bagged charges. This made its position almost impossible to hide when fired and necessitated thorough cleaning at regular intervals.

Earlier British RML artillery fired loose-fitting conical projectiles with projecting studs which slotted into deep rifling grooves in the barrel; the so-called Woolwich rifling system. This system had proved unsatisfactory as excessive windage (the escape of burning propellant past the projectile) caused erosion in the bore. To overcome this it was necessary to devise some means of preventing the forward escape of gases when the gun was fired. After several experiments, in 1878, a copper gas-check, in the shape of a cup placed between the shell and the powder cartridge, was found to be the best solution. Apart from preventing windage it was also found that the gas-check increased the range of the gun. Originally the gas check was not fitted to the base of the shell but rotated independently. After it was suggested that it might, by being fixed to the shell, also be used to impart rotation, the studs on the shell were dispensed with and the gas- check became an early form of driving band. With no studs on the projectile it was now possible to use a shallow “polygroove” rifling system (20 grooves 0.1-inch deep and 0.5-inch wide with the twist increasing from one turn in 100 calibres to one in 35 at the muzzle). In Britain the 6.3-inch RML howitzer came into service in 1878 and was the first artillery piece to make use of this development.

During the early 1880's the South African Republic (ZAR or Transvaal) conducted a number of small campaigns against rebelling native tribes, many of these ending up in mountain sieges. To assist, a 6.3-inch howitzer and a mortar were bought from the British Cape Colonial Government; the howitzer arriving in Pretoria from King Williams Town on 7 April 1882.

In the Transvaal the howitzer saw service during the 1882-1883 Nyabêla campaign under Commandant Henning Pretorius; later CO of the Staatsartillerie (State Artillery). During the same campaign it was used to fire the salute at Paul Kruger's first presidential inauguration in May 1883, thereby gaining a link to this famous Boer leader.

Unlike most of the Transvaal's other obsolete RML guns, the 6.3-inch howitzer was not posted at Fort Hendrina or Pietersburg in the Northern Transvaal during the 1890s. Instead it remained at the artillery camp in Pretoria and ammunition usage reports during this time indicate that it was probably used for training. Ammunition stock-takes and order requests from 1886 to 1896 specified the use of common and star shells, case shot as well as Boxer time fuzes of 15 and 30 seconds and Pettman percussion fuzes. Although obsolete, this howitzer remained the Transvaal's largest artillery piece until the arrival of the well-known 155mm Schneider Creusot Long Toms. 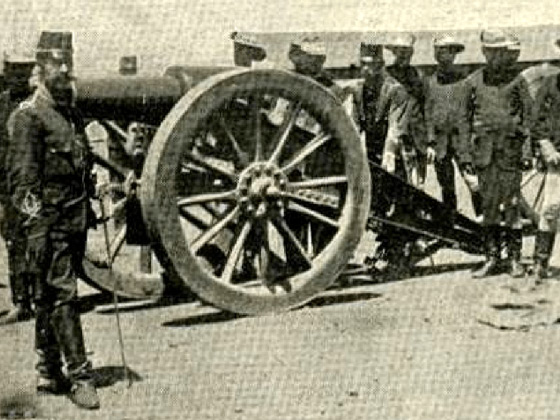 Members of the Transvaal Staatsartillerie photographed with their 6.3-inch howitzer in the artillery camp in Pretoria, c1896.

No evidence could be found suggesting that the Transvaal’s 6.3-inch howitzer saw action during the Anglo-Boer South African War of 1899-1902. On 29 October 1899 Captain Kroon of the Staatsartillerie reported that it was standing in the Johannesburg Fort, complete with 100 filled and 100 unfilled shells. It is not sure exactly when the howitzer was sent to Johannesburg, but it was somewhere between August 1898 and January 1899. On 31 May 1900 the British Army marched into Johannesburg and found the fort and a number of obsolete guns therein, including the 6.3-inch howitzer, abandoned. General Marshall's list identified this howitzer as a Mark I gun, serial number 33, manufactured at the Royal Gun Factory (RGF) in 1879. An earlier Staatsartillerie letter, dated 19 July 1886 also identified the howitzer's foundry number as "Vickers Steel No. 3699". With the gun was its carriage and limber (ammunition wagon), all made at Woolwich, as well as 50 fuzes, 180 common shells and 90 case shots. There were also a large number of black powder cartridges roughly made up in unmarked bags of various materials. 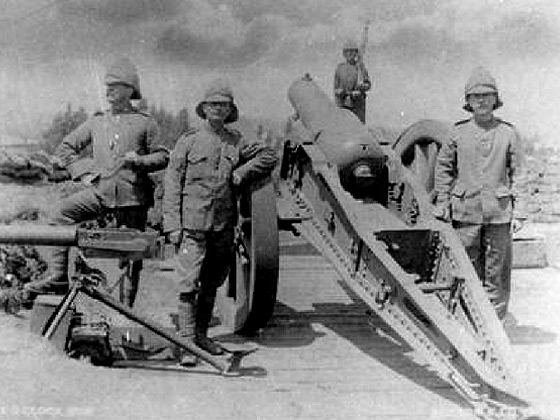 Tommy Atkins posing with the captured Boer 6.3-in howitzer in the Johannesburg fort.

After its capture the Boer 6.3-inch howitzer was used as the one o'clock gun in Johannesburg. Although its capture is listed in War Office documents on captured Boer guns, no mention could be found in British trophy gun lists of it being sent to England in 1902/1903, as was done with most other Boer trophy pieces. Fortunately this historic piece stayed behind in South Africa and today it can be viewed outside the Ladysmith Town Hall where it rests next to a British howitzer of the same calibre and design. It is not known how No. 33 ended up in Ladysmith and until 2004 it was generally accepted that both were British howitzer. 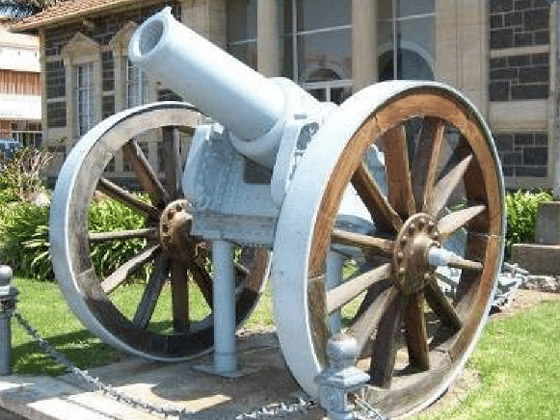 No. 33 photographed in front of the Town Hall, Ladysmith

As opposed to the Boer piece, the British 6.3-in howitzer standing next to it (No.48) did see action during the Boer War. It was one of two sent from Port Elizabeth in the Cape Colony to Ladysmith shortly before the siege of the town commenced. During the siege the pair was dubbed "Castor and Pollux"; after the mythological twin sons of Zeus. They became famous for damaging a Boer Long Tom on Middle Hill, subsequently forcing the Boers to move it to Telegraph Hill. A few weeks later the Long Tom took revenge by scoring a direct hit on Castor (the mortal son who fell in battle...), necessitating the replacement of its breast transom. In total the two British howitzers fired 765 rounds during the war, mainly in defence of Ladysmith and, although obsolete, therefore played an important role in the war. 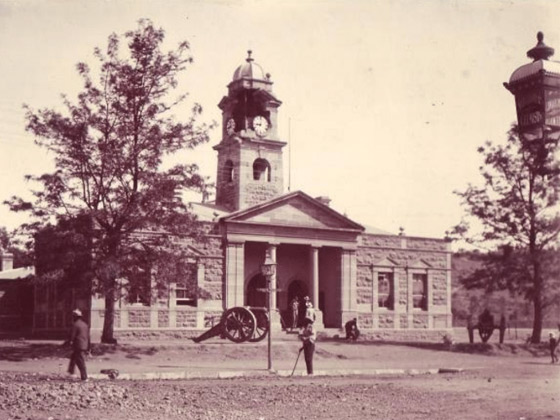 Two 6.3-inch RML howitzers in front of the Ladysmith Town Hall at the end of the Boer War. Note the damage to the clock tower, caused by a direct hit from a Long Tom shell.

Today only one of the original British pair still guards the entrance to the Ladysmith Town Hall. Its left trunnion inscriptions identify it as also being a Mark I gun manufactured at the RGF in 1879. The two former foes both carry the same weight marking on the breech "17-2-23" (17x112 + 2x28 + 23 = 1983 lbs). It is suspected that the second British howitzer was replaced with the captured Boer piece, possibly due to the damage caused by the Long Tom's direct hit. However, contradicting this, No.48’s carriage still carries battle damage, which indicates that this probably was Castor, the gun damaged by the Long Tom's direct hit. So, it seems today, in stead of Castor and Pollux, we have Castor and Paul guarding the Town Hall! What became of Pollux after the war remains a mystery..

A British 6.3-in RML howitzer and crew during the Boer War. Note the damage to the carriage below the trunnion. The same damage can still be seen today on gun No. 48 outside the Ladysmith Town Hall (right).

So, when you are travelling through the KZN Midlands again, do yourself a favour and stop over at the Ladysmith Town Hall to greet Oom Paul’s howitzer and the British defender Castor. Once sworn enemies, today the two old veterans are resting in peace, side by side.