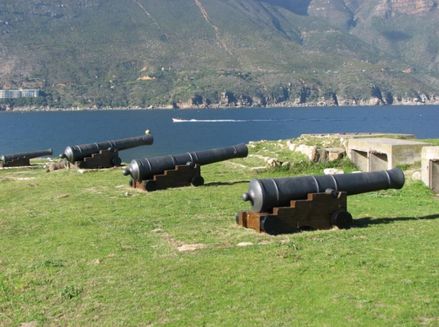 The cannons are home

After a protracted stay in ”hospital”, West Fort’s historic Swedish cannons dating from the middle of the 18th Century are home and in good shape.

This saga started in 2009 when members of the Hout Bay and Llandudno Heritage Trust (HB&LHT) noticed that the ancient cannons were in a very bad way. They had suffered extensive corrosion from their exposed position on the edge of Hout Bay, but more seriously the old wooden carriages, dating we believe from the 1940’s, were rotten and crumbling away. This was of heritage concern, but an even more immediate concern was the very real possibility of injury, if one of these huge cannons fell on one of the many children that often play on them. The final straw was when one did collapse; fortunately without injuring anyone.
The conservation of the site is the responsibility of the Province but sadly it has been neglected for many years. The Trust decided that to avoid possible injury and further decay, action was required, and they would take responsibility themselves. Having no funds available to carry out the work, approaches were made to a number of organizations known to the Trust – and they responded magnificently. This report is not merely a record of the work done, but a tribute and thanks to the public spirited companies who made it possible. 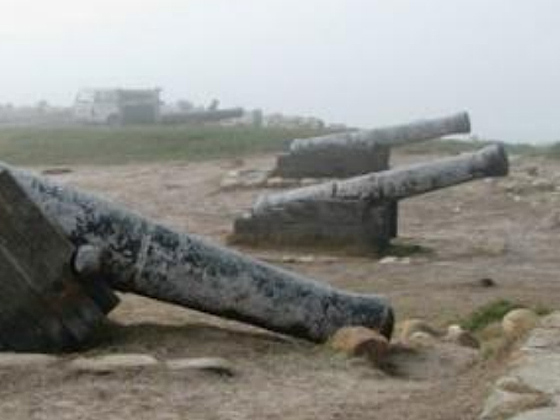 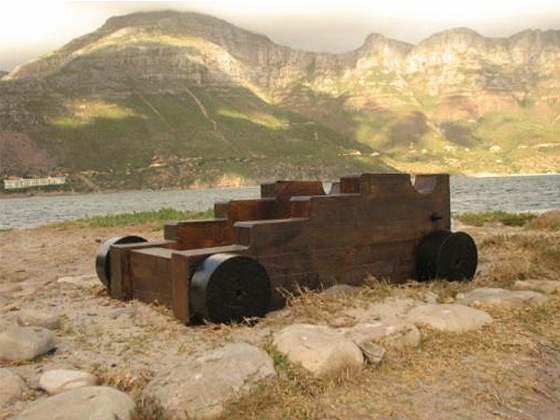 Firstly it was clear that it would not be financially viable to build new wooden carriages like those the Trust had made for East Fort and a concrete solution was chosen, following a precedent set elsewhere in the City, for example the pair of cannons at the top of Camps Bay Drive at Kloof Neck. Measurements were taken and a design drawn up. The detailed design of the reinforcing was done by Hout Bay based Consulting Engineers, ZAA Engineering Projects and Naval Architecture (Pty) Ltd. Wilson Bayley Holmes Ovcon (WBHO) agreed to manufacture the pre-cast concrete carriages free of charge and Kost Engineering made the moulds for the carriages. Production was started and quite understandably work of this nature could only proceed intermittently when the contractors had some spare time, staff and concrete available – a very tall order in these tight economic times. The carriages were completed at the end of 2010 and delivered to site by WBHO in February 2011. An oak varnish was applied that gave quite a convincing wood-like finish.

The first step was to clear the barrels of sand and the collection of cans, broken glass and so on deposited by passers-by. It immediately became clear that some of the cannons were badly blocked with hard rust deposits and one even had an old cannon ball wedged into its barrel. The cannons were first grit blasted and all the old rust was removed, leaving gleaming clean cast-iron, perhaps last seen like this when the cannons were made in Sweden 250 years ago. 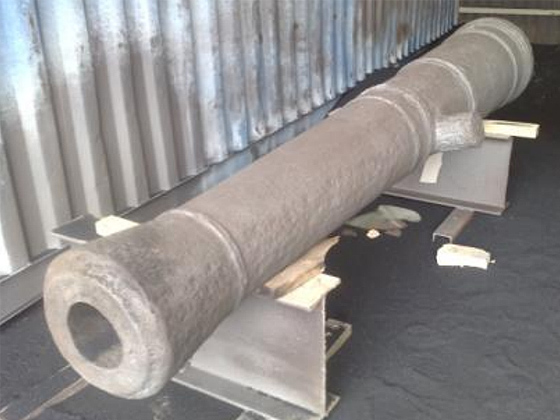 We now tried to clear the barrels using brute force – using hammer and chisel, crowbars and angle grinders – to no avail. An electrolytic method was then tried, also without success, but more painstaking chiselling finally dislodged the cannon ball, leaving a clean bore behind it. All this work, again done free of charge and in between paying jobs, took a considerable time to complete. Finally all the cannons were re-blasted to remove the light rust that had accumulated since the major rust was removed and they then underwent an extensive process of washing to remove embedded salt, drying, a final third flash blast and painting with a thick coat of high quality Acrylic Ester paint with flaked graphite in a matt charcoal colour. A decision was made that only the three cannons that had open bores might be fireable in future, so the other three were permanently blocked to save them from internal corrosion.
To protect the bores of the open cannons, tompions – removable plugs - had to be made and again Cape Town industry responded, rubber being donated by Table Bay Rubber and the tompions were made by Javan Engineering, using poly-urethane provided at a discount price by Specialised Mouldings.
At West Fort, the old stone bases for the carriages were repaired by staff of the Hout Bay Market and WBHO once again provided the transport to bring the completed cannons back home. All six restored cannons were finally home and in position on their concrete carriages on 17 July 2013. Hout Bay Market and Fish on the Rocks have undertaken to keep the site secure and tidy in future.

Three of the cannons were successfully proof fired on 24 July under the supervision of the Cannon Association of South Africa. This involves firing a larger charge than normal under carefully controlled conditions. Thereafter the cannons are formally certified as safe to fire with the much smaller regular charge. A surprise was that one of the cannons was identified as a 36 pounder, one of only four intact Swedish 36 pounders in South Africa, although there are 4 French 36 pounder carronades and a number of other 36 pounders, ingloriously imbedded in concrete as bollards at the Castle. West Fort thus has five 24 pounders, one 18 pounder and one 36 pounder. 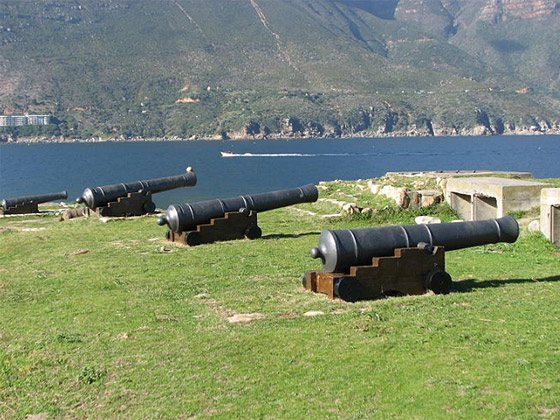 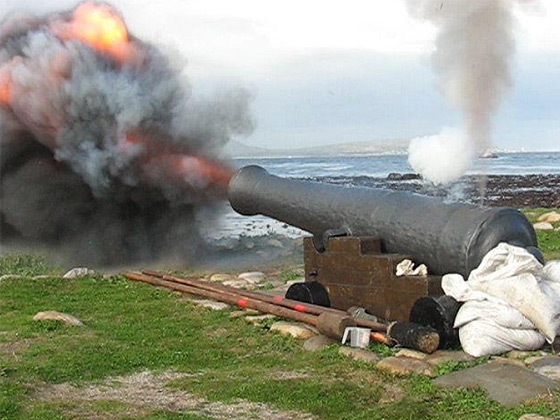 The project has been supervised by Chris Everett, current Vice-Chair of the Hout Bay and Llandudno Heritage Trust and a Gunner of the Honourable Order of Hout Bay Artillerymen.
The Trust expresses its grateful thanks to 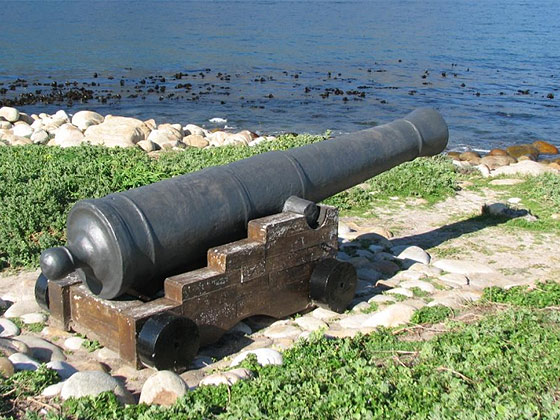