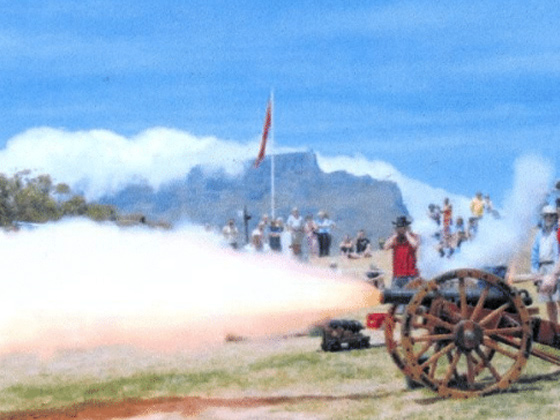 By: Judy Bryant, 7 October 2007 (From the Sunday Times)
Print Form
Finding, restoring and firing old cannons is booming in South Africa, but they're all taken - unless you have a lost howitzer in your hallway. Judy Bryant meets some gunners.

South Africa boasts a wider range of old cannons and better examples of them, than any country in Europe, where most cannons were melted down during WWI and WWII to make new weapons. But, had it not been for a few lone enthusiasts, most of these once-feared weapons of war would have been lost forever.

A total of 928 cannons, dating back as far as 1514, are recorded countrywide. Most of them were made in Sweden, England, France or Portugal and brought here for defence or signalling. Others were landed here when their ships were scrapped; they were salvaged from wrecks, or brought over by foreign navies as battle trophies. Some were light and manoeuvrable and easily carried by travelling armies, while others were very heavy and designed to defend fixed positions. When rifles became the more effective weapon, many cannons were sold as scrap or left to rust in mountain valleys. Some lay on the ocean bed in shipwrecks, in the moat around Cape Town's historic Castle, or were forgotten in warehouses and workshops. 'Their wooden carriages rotted away or were burnt.

The fate of these historic relics would have been sealed forever, had the responsibility for firing Cape Town's famous Noon Gun not fallen under the unit of the redoubtable Gerry de Vries, then the Officer Commanding SAS Wingfield. De Vries became intrigued by the markings on the Noon Gun and about 15 years ago he started delving in old archives and museum records to find out more; but he had little success.

One day a visitor to Cape Town, the master armourer (or curator) of the Tower of London, Guy Wilson, enquired about the Noon Gun. De Vries explained he'd been unable to unearth any information. To his surprise, a gift of reference books on cannons and related weapons arrived shortly thereafter.

It turned out that the Noon Gun was the oldest gun in daily use in the world, De Vries even more fired up, and he embarked on a countrywide search for cannons. "I got lots of help from the general public," he explains. "I'd ask around in towns and hand out my card, and six months later I'd get a call from someone on holiday who'd come across a cannon in another town. Sometimes I'd get a photo. I'd stick flags on a map whenever a cannon was reported, and when I had time I'd do a tour of that loop."

Soon it became obvious that (here were at least 300 cannons scattered around the Cape Town area alone. De Vries mentioned his search to a friend of nearly 30 years, the late Jonathan Hall, who initially came on and set up a website. And at a social function, De Vries was discussing his new-found hobby with the then head of Durr Estates, Len Schmidt, who mentioned that his company wanted to support a worthy heritage cause. They agreed that De Vries and Hall would produce a list of the cannons scattered around the Western Cape -- about 350 were finally recorded.

Thinking that the subject was one of limited interest, they produced 200 books, but these sold out soon after the 1997 launch.

But largely thanks to his and Hall's efforts, South Africa now has a Cannon Society with 68 enthusiasts. The members include an entomologist, a dentist, a photographer, several engineers, two professors and a retired major-general. Some members are solely interested in the historical aspects, while others - "the gunners", including one lady gunner - enjoy the adrenalin rush of putting a fuse to gunpowder.

Cannons used to be prohibited under the original Firearms Act, and the SA Police voiced their concerns about the sudden enthusiasm for making loud bangs over weekends. The Cannon Society countered by writing a safety manual, preparing a code of conduct, setting up training for gunners, and the police were satisfied. Now changes to the Act have made cannons, along with antique muzzle-loading firearms, a deregulated item (you don't need a licence, but thorough training and a competency certificate are required). As De Vries points out: "I've never heard of anyone robbing a bank with a cannon."

Cannons are classified into different categories: guns (the classic long-barrelled cannon); the mortar (short cannons with a large bore and chamber); the howitzer (a more transportable mortar); the carronade or smasher, designed for naval close-quarter combat; and the cannonade or gunade, a mix of carronade and gun.

Many of the cannons now registered in South Africa were found lying in old store-rooms, ditches, behind workshops, buried in the bush or waiting to be melted down at scrap yards. Some served as quay bollards and several had even been used to mark out a horse-racing course on Green Point Common. One cannon was found 11m deep during demolition of the old power station on the Cape Town foreshore. With it were many identical broken bottles, shards of Dutch china, large pieces of rotten wood and pieces of iron. This is where the beach was in the 18th century, so it could have been where a ship ran aground or sank," suggests De Vries. Two other cannons - known as Caret 75mm mountain guns - are the only examples of their type in the world.

There's been tremendous research to establish which gun belongs to which site and 23 guns have been reinstalled at their original homes. A major triumph was re-establishing seven 18-pounder guns in Hout Bay, making it the oldest working gun battery in the world. (They were first put there in 1782.) Another recovery effort took 40 sailors four days to drag cannons from the bottom of Camps Bay valley so that they could be restored and set up at Kloof Nek.

These were dated 1740 and were originally part of a gun battery intended to protect the Castle from forces landing in Camps Bay.

"Now they aren't just pieces of iron lying in the bush, and I get a thrill whenever I see a glossy advert or photo with these guns in the background," says de Vries. Another cannon was returned to its old home on the Tygerberg hills: it was one of the guns in a signal system operating from the Castle to Swellendam, and as far as Citrusdal. The system was used to call up burgers if the Cape might be invaded, and it was used on five occasions.

Some of the guns have been stored at Lion Battery in Cape Town for specific restoration projects, or for future allocation to such projects. Restoration work is time-consuming. Many finds are rusting and blocked with rocks, dirt and cannon balls. Special tools are needed as they can only be cleared out from the front.

Cannons of important historical significance are generally not fired, but others are restored and finally taken to an isolated spot where "we put in a double charge, light a long fuse and run away ... if it's going to break, it should rather break now."

The Society is increasingly called on to lend a dash to various celebrations and commemorations. On Freedom Day a chain of eight cannons was fired from Simon's Town to the Waterfront.

The roar of a hefty cannon was the highlight of a Portuguese Conference in Mossel Bay, 20 guns were fired in 2006 to celebrate 200 years of the Noon Gun, and there has been a re-enactment of the Battle of Blaauwberg berg.

International representatives of the regiments that took part in the original battle travelled to South Africa and a reconditioned Dutch gun was officially inaugurated as a monument.

"We had 13 guns in battle and six guns as a signal system; we fired 28kg of gunpowder and Melkbosstrand is still taking Sanatogen," reports Gerry. "There's not a cannon in this country we haven't found, identified and recorded - they are no longer going to the scrap yard. We've taken these old relics and given them status and a value to society.

Some people say these are weapons of destruction, but we have changed them around and they're now doing community service." 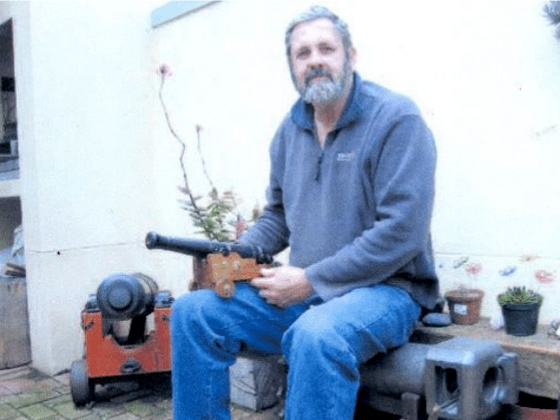 BABY BOOMER: Cannon Association of SA Secretary, Gerry de Vries, with two English three-pounder cannons. He's holding a replica he made of a Dutch VOC cannon _ the original can be seen on Kloof Nek, Cape Town.

Would-be cannon enthusiasts will find the majority of examples in Cape Town and environs, including the Naval Museum and Simon's Town museum. But cannons can be found in all major centres and even tiny dorps.


An excellent general reference on cannons, which includes a record of the current position of all the recorded examples in South Africa, is: The Muzzle Loading Cannon of South Africa by Gerry de Vries and Jonathan Hall.