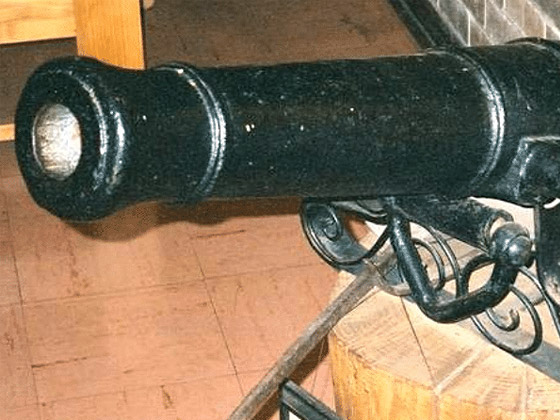 By: M. C. Heunis, 19 June 2013
In 2003 the South African Heritage Resource Agency approached me concerning a smooth bore muzzle loading (SBML) ship’s cannon on display at Belfast High School in Mpumalanga. Under previous heritage laws the cannon was declared a National Monument on 17 August 1979 and today still carries a brass plaque indicating this status. Under the new National Heritage Resources Act of 1999 movable objects like this had to be re-evaluated before it could be declared a National Heritage Object. I was given the task to establish whether this piece was historically significant - and what a unique and historically significant piece it turned out to be!


This cannon is a typical small civil naval gun from the early 19th century. It is made of cast iron and is approximately 990mm long from the muzzle face to the end of the button. The bore measures between 58-60mm, indicating that this was a 1-pounder when new. Originally the calibre would have been 53-54mm, but due to repeated firing, cleaning and corrosion the bore gradually enlarged over the 200 years of its existence. Being a 1-pounder, it was designed to fire a 1lb. (450g) solid shot iron ball with a diameter of around 50mm, propelled by a black powder charge of about 5 oz (140 g). With this charge and at a relatively high elevation of 30 degrees it could easily reach a target 1000 m away, but to be effective, the gun would typically be used at around 300 m ranges.

The Bezuidenhout cannon as displayed at the Belfast High School.

Inspection of the cannon revealed the markings “EB” in relief on the left trunnion and “1803” on the right. From this it is relatively easy to identify the “1803” as the year of manufacture. The letters "EB" however posed more of a challenge. Fortunately Gerry de Vries, author of the book “The Muzzle Loading Cannon of South Africa”, was able to assist. The only reference to these letters that could be found was from the Ehrendahl Iron W the cannon was registered in the Durr Register of South African Muzzle Loading Cannon as Durr No. 794.

Since the cannon has no weight markings, it probably was intended for use aboard a civil trading vessel and would therefore have been traded on the open market at the time. This means that it could have been bought for a ship of any nationality and exactly how it found its way to South Africa will probably never be known. In times of great need civilian cannon like this were often temporarily pressed into military service.

One interesting feature of this piece is the square shoulders on the inner ends of its trunnions. This feature became fashionable around 1795-1800 and was intended to prevent the cannon from slipping left or right in its carriage. Although it is currently resting on an ox wagon brake shoe, originally it would have been mounted on a small wooden naval carriage for use on board a ship or perhaps even a small makeshift wheeled field carriage for use on land.

The Story of the Bezuidenhout Cannon

The fact that this little cannon is over two hundred years old does not give it historical significance. The role it played in our country’s history however does.

At the start of May 1842 a British military force commanded by Captain TC Smith arrived at Port Natal (Durban) in the then Voortrekker Republic to annex the harbour for the British Crown. Outside Port Natal, below the present Berea Hill, Smith constructed a rectangular earthwork to serve as his fortified camp. The Voortrekkers who had moved to Natal to get away from British rule was not amused and so a commando of Boers under Commandant-General AWJ Pretorius, assembled at the small settlement of Congela to oppose Smith.

The two opposing forces used the next few weeks to build up their supplies and relative peace reigned until 23 May when one of Smith’s field guns opened fire on Boer herdsmen while they drove some of Smith’s draught animals off. Infuriated by the loss of his oxen, Smith decided to launch an artillery supported night attack on the Boer base at Congela. Two Royal Artillery 6-pounder field guns were limbered up in tandem behind a team of oxen, while a howitzer (some sources say a mortar) was placed in a flat bottom boat and ordered to row out to Congela Bay to bombard the town from the sea side. Once in range Smith’s artillery opened fire on the settlement with a number of artillery pieces as well as rockets, but according to the diary of a German dealer who lived in Congela little or no harm was done and most of the shots fell to the right of the town.

Initially the British bombardment attracted no counter fire from the Boers. Then, just when the British started to rejoice because they thought they had driven the Boers off, a Boer advance guard, hiding in a mangrove forest outside the town, suddenly opened an accurate small arms fire on the British. Smith immediately turned his arms against the small group of Boers, but after the Boer guard was re-enforced by Pretorius and more men from Congela the fire grew so hot that Smith was forced to retreat with great loss. The oxen pulling his two field guns were shot down while some bolted, enabling the Boers to capture both cannon.

To follow up his success, Pretorius pushed forward after the fleeing British and attacked their camp in the early morning hours. After a heavy fire fight one of the small forts in front of the camp was captured and inside the Boers found two more cannon. However, soon after taking the fort, they started running out of ammunition and after a false alarm was raised somewhere else on the battlefield the Boers decided to abandon the position. On evacuating the fort one Boer, Daniël Pieter Bezuidenhout, decided that he will not allow both cannon to fall back in British hands and in a feat of strength he lifted the 179 lb. (81.2 kg) cannon from its carriage and carried it back to the Boer positions on his shoulders. 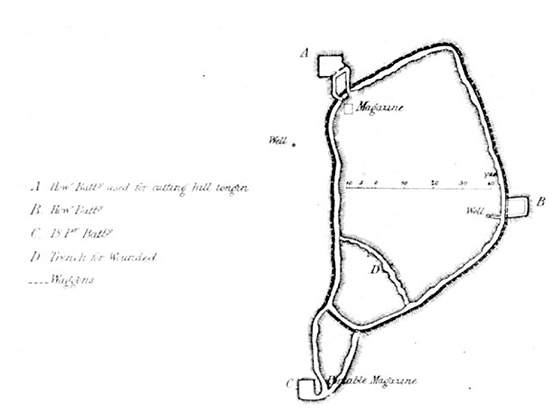 A contemporary map of Smith’s camp outside Port Natal. The Bezuidenhout gun came from one of the three small forts shown outside the main fort, most probably A as it faced towards Congela.

After this incident a four-week long siege and bombardment of Smith’s camp followed during which time the Boers made use of about six guns. These included two small cannon dating from the Great Trek as well as those captured from the British. A total of 651 shots were fired into the camp, and when their ammunition supply started to dwindle, the Boers manufactured round shot for their cannon by breaking up the anchor chain of one of the vessels in the harbour and by casting lead around it.

The Boer siege of Smith’s camp however came too late to prevent the now well known Dick King from slipping out of Port Natal. King made an epic ten-day journey to the Eastern Cape to inform the British authorities of Smith’s deteriorating position. On 24 June a British relief force under Colonel AJ Cloete aboard the H.M.S. Southampton and the Conch arrived at Port Natal. In the afternoon of the 26 th the Southampton opened her broadside on the Boers guarding the beach, while British troops were landed from the Conch. Although under fire from Pretorius’ men and one cannon on the beach (mounted on a heap of sand!), the landing troops managed to force the Boers to retreat and lifted the siege 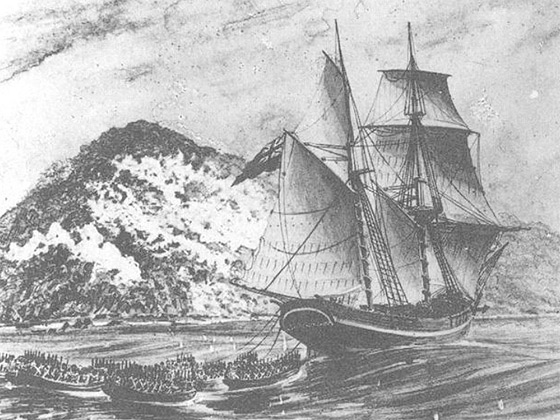 After the siege was lifted a peace treaty was signed between the Voortrekker Volksraad and the British. Item 2 on the treaty stated that the Boers would hand over all cannons that were captured, as well as others in their possession, with the ammunition and supplies belonging thereto. Pretorius compiled the following list: one 18-pounder from The Point, two 6-pounders from Congela, two 4-pounders from the Mazeppa, one 4-pounder that was unserviceable, a 3-pounder and one unserviceable 1-pounder. Pretorius also mentioned that he had a small 1½ or 2-pounder brass gun on his farm. It is not certain if the unserviceable 1-pounder on the list was the gun carried of by Bezuidenhout, but we know for a fact Bezuidenhout did not return the gun he captured as it became his private property. If it was indeed the same 1-pounder gun shown on Pretorius’ list, the “unserviceable” probably indicates that the British spiked it before abandoning it.

During the period 1843 to 1845, after Natal was officially annexed by the British, two thirds of the Boer inhabitants trekked to the interior. Daniël Bezuidenhout also moved and took his captured cannon with him to Slaapkrans in the Free State. On 16 December 1884 the now elderly Bezuidenhout took the cannon to a Dingaansfees (Day of the Vow) on the farm Lakenvlei, district Middelburg, Transvaal. To the amazement of a crowd of onlookers he fired three well placed shots at a nearby hill. Dually impressed by the little cannon, the Day of the Vow Committee immediately decided to collect money among the festival goers and bought the cannon from Bezuidenhout for £5 and a couple of shillings with the promise that it would be used to fire salutes at future commemorations. By July 1910 the cannon was the property of the Belfast Day of the Vow Committee and was kept on the farm Hartebeestspruit. In later years it was donated to Belfast High School by the chairman of the committee, Mr. OJ Coetzee.

Although the Bezuidenhout cannon was not, as some historians believed, the first cannon captured by the Boers from the British, the remarkable history of its capture makes it a truly significant piece. It is one of the only tangible reminders we have of this intriguing part of history, dating back to the first of several wars between the Boers and the British. Not only the cannon has an interesting past, its owner, Daniël Bezuidenhout, also had an incident filled life and interesting family connections. He was the only member of the Bezuidenhout family to survive the Zulu attacks on Blaauwkrans in February1838 and he carried the scars of 17 assegai wounds to his death. He was also a direct descendant of the Bezuidenhouts of Slagter’s Nek and a close family member of the Bezuidenhouts of Potchefstroom around whom the “Bezuidenhout Wagon Incident” broke loose which sparked the outbreak of the Transvaal War of Independence in 1880.

Although it will probably never be know exactly how and when the Bezuidenhout cannon came to Natal, both the cannon and its former owner played a significant part in our country’s turbulent, but colourful past. It is therefore important that the Bezuidenhout cannon should be preserved at all cost and for this reason it was declared a national heritage object on 25 April 2005. Note: Plans are underway to have the cannon moved to the Voortrekker Monument in Pretoria where it will be displayed in the museum with another Boer cannon, the famous “Grietjie”. 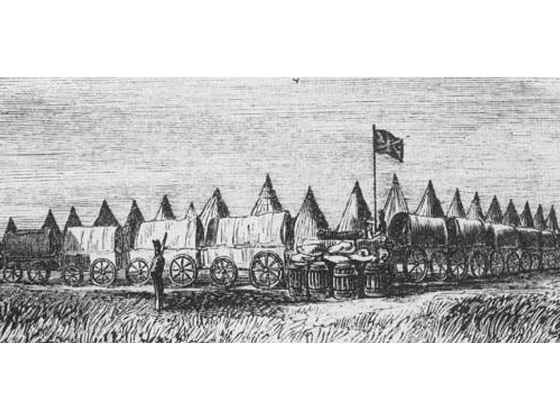 A frontal view of Smith’s camp, probably before the siege started. Note the 18-pounder gun position constructed from sand bags and wooden casks filled with sand. 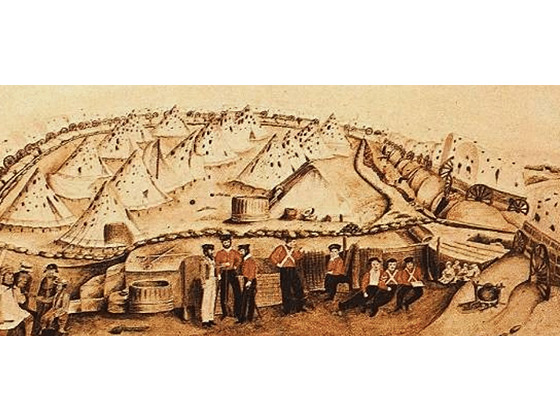 Another view of Smith’s camp showing the trench for the wounded. The damage left by the Boer bombardment is clearly visible on the bell tents and wagons.