The Cannon Station at Hessequaskloof 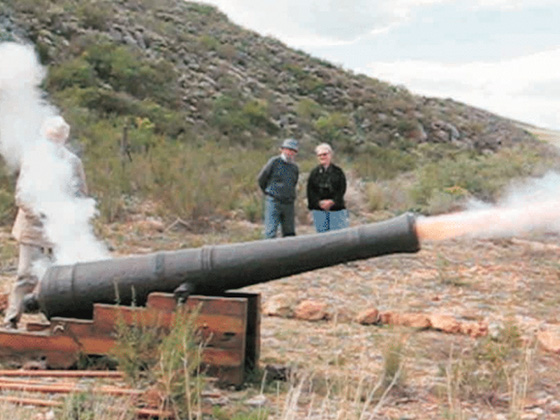 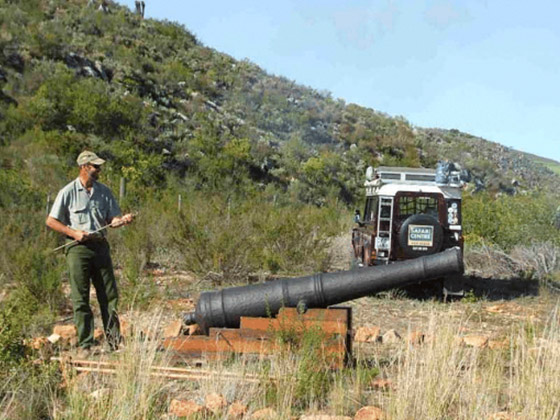 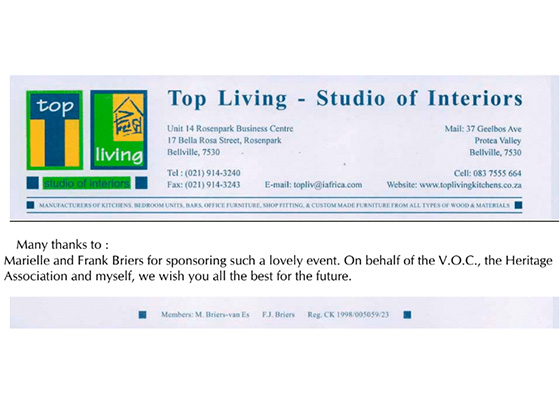 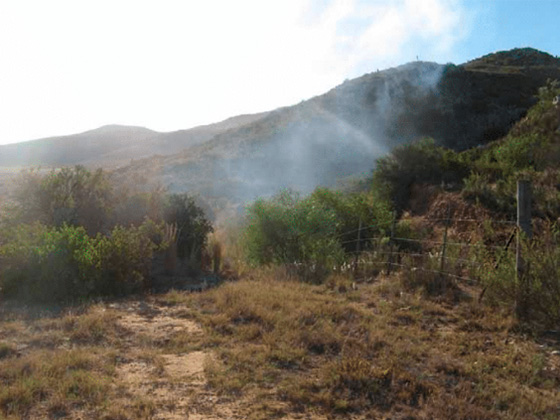 This is a classic illustration that not only the "Bang", but also the smoke thereafter was part f the signal system. This smoke was observed miles away across the Overberg. Clear "command" that the "call up' system called! 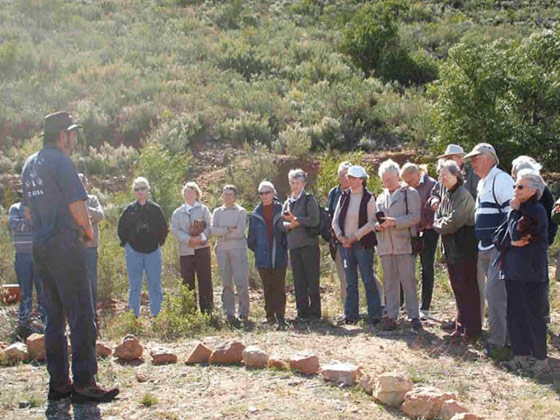 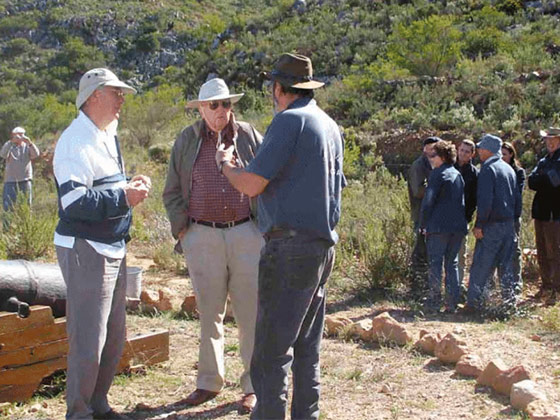 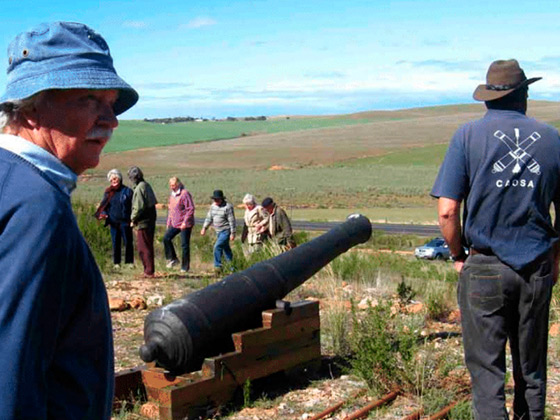 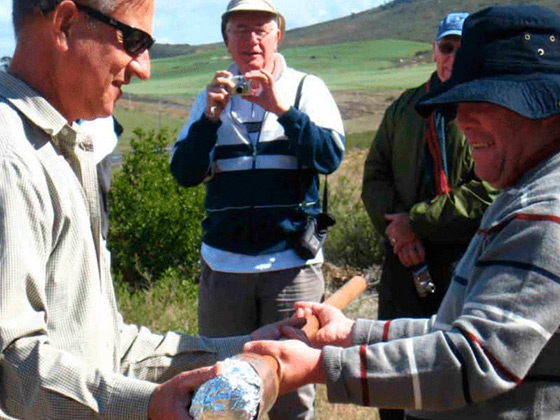 Perfect winter's day for firing at Hessekwaskloof
There was no shortage of help preparing the cannon to fire. 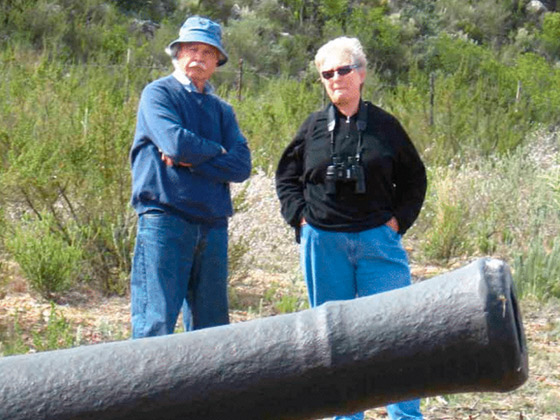 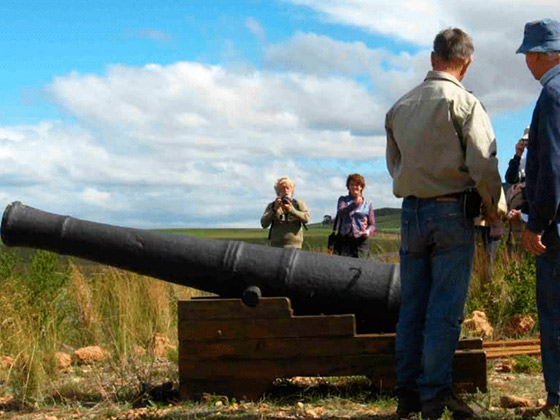 mmmm. Seeing is believing.
Dan Sleigh preparing himself to fire. 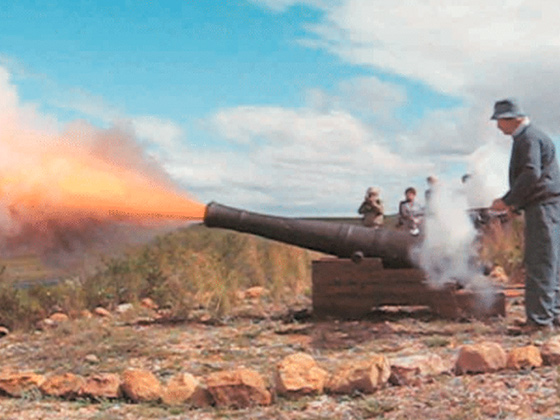 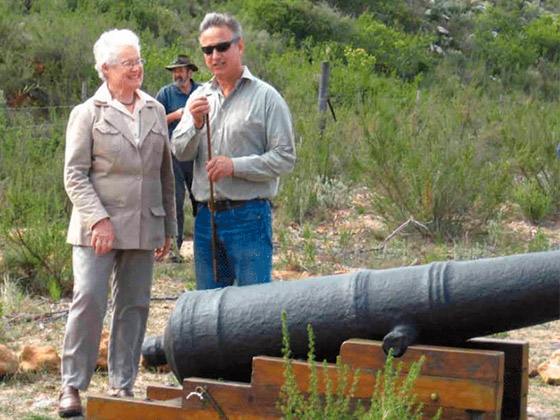 Dan Sleigh firing on behalf of the VOC
Lesley Howard. Very nervous due to the fact that she is next to fire the 8 pounder. 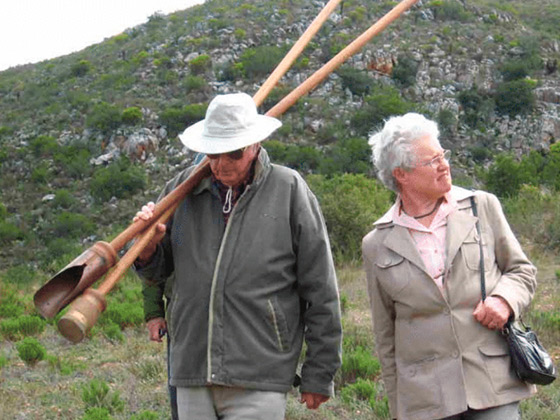 Leslie Howard. First woman ever to fire the 8 pounder at hessekwaskloof.
"What a shot! Still can't believe I fired that thing." 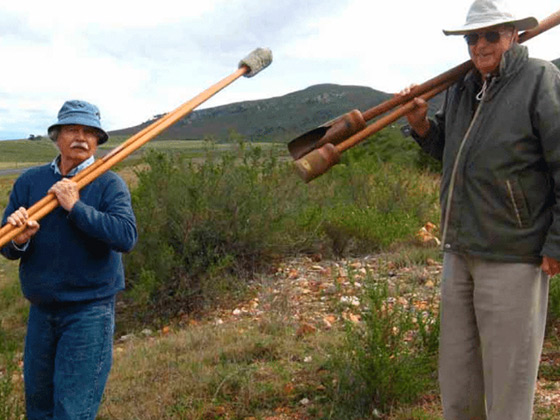 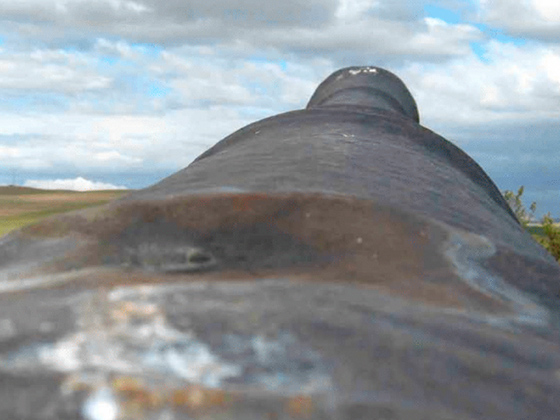 Dan Sleigh and Peter Ratray acting as Michel Otto who was appointed as gunner
in 1743 to fire at Hessekwaskloof.
Happy old 8 pounder lady very satisfied with herself.

Gathering for drinks and a braai after the firing. 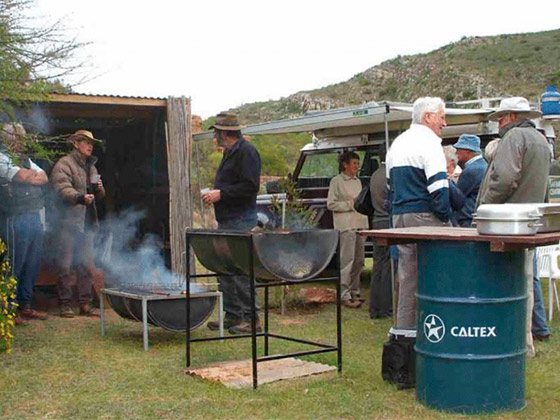 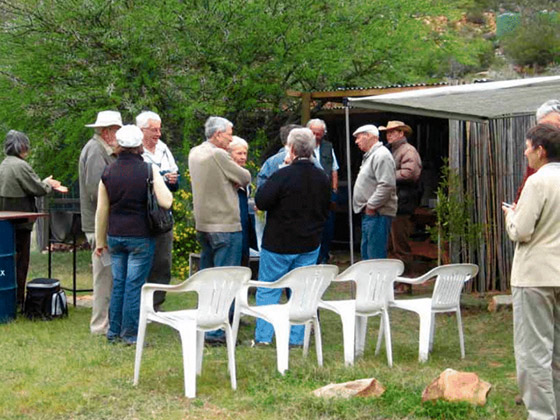 Press Release and Other 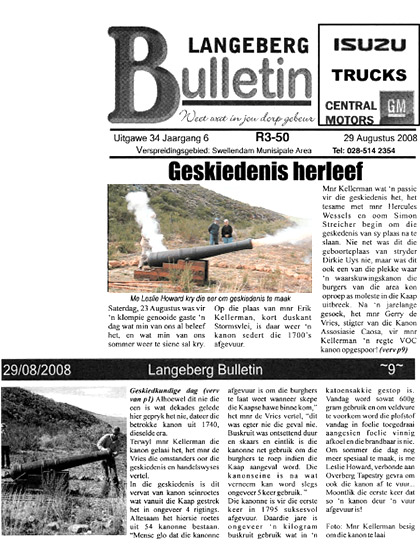 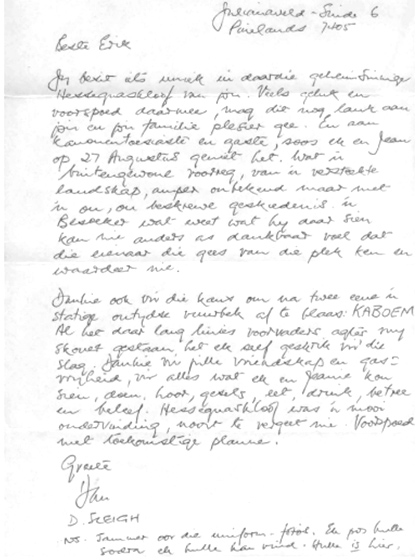 Annie get your gun - or, the day I fired a cannon!

It was with great anticipation that I accepted and invitation from Erick Kellerman to attend the firing of a VOC muzzle loading cannon on his farm Hessequaskloof on 23 August 2008. Readers of my book Overberg Tapestry will appreciated my passion for the history of the Overberg; a passion shared by Erick.

It was with great interest that a group of some 30 guests, mainly members of Swellendam's Heritage Association, listened to the account by Gerry de Vries, founder of the Cannon Association of South Africa, of the signal system that was operated by the VOC in the 18th century. Individual cannons were placed in ranks stretching into the interior of the Western Cape, some 14 kilometers apart. When fired in succession, beginning in Signal Hill in Cape Town, they served as a warning and call-up system at times of danger or threat to the Cape. Gerry also recounted the fruitless search on Erick's farm for the original cannon that was stationed there all those decades ago, and the joy of finding a suitable VOC cannon to replace it.

Before Erik fired the cannon for the first time that day, we learnt the intricacies of the loading and priming process. (There had been an earlier firing some months before when the cannon was first positioned on the farm.) As a precautionary measure, Gerry dramatically waved guests away from the front and back of the cannon. The bright plume of the explosion was followed a split second later by a thunderous blast that echoed across the valley and scattered the sheep below. Passing motorists were taken by surprise, and the shock of the blast was so great that I almost dropped my camera, missing the crucial moment.

Once the excited exclamations of the onlookers had subside, Erick told us that the cannon was to be fired again. He said that in fact we were about to witness history in the making, as he had selected a female guest for the second firing. All the while he looked at his daughter, and then talked about someone who had contributed to the celebration of the Overberg as an erea of great historic and scenic value. 'This someone I must get to know,' I thought. Suddenly Erik swung around in my direction and invited me to fire the cannon! I threw my handbag to the ground in disbelief and joy.

While the cannon was primed, Erick asked me again if I really wanted to do this thing. 'I wouldn't miss it for the world,' I answered, 'even if I am blown to Kingdom Come!' Finally I was handed the linstock, which was duly lit. I applied the flame to the vent in the the breech, and immediately I disappeared in a plume of smoke. the thunderous explosion made me jump back, but I could not have been more thrilled to be the first woman to fire this VOC cannon. I would do it again any time, but nothing could ever match my exhilaration on the 23rd August 2008, to have been granted this fantastic honour. The memory will go with me to my dying day. Annie had been reborn, and I became known as 'the gunnery sergeant' to one of my friends. Thank you, Erick, for this wonderful opportunity, which comes a decided first in my list of adventures that include flying a glider for all of ten minutes, landing helter-skelter in a Spitfire on a bumpy runway, and a near drowning in the Riviersonderend.